J.P. Ricciardi, the general manager that Toronto sports fan have
grow to love to criticize in recent years, has agreed to join ESPN’s
Baseball Tonight in a month’s time.

After failing to trade Roy Halladay before the 2009 trade deadline
after issuing a public announcement about Halladay’s availability,
Ricciardi was let go after the season.

Alex Anthopoulos, Ricciardi’s former assistant, filled in as General
Manager for the club, succeeding to trade Halladay in mid-December as
part of a 4-team trade that brought three prospects to Canada’s largest
city.

In eight seasons acting as General Manager for the Blue Jays, his
record was 642-651, with four seasons above .500. However, the legacy
he leaves behind in Toronto is best described with the statistic zero:
the amount of playoff appearances he led Toronto too.

Ricciardi will become a commentator for Baseball Tonight, the top
baseball show on ESPN’s agenda. Baseball Tonight has been running since
1990 and recaps the action in each day of the regular season, usually
airing at 10:00 pm EST. 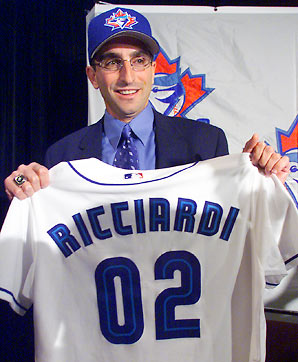